My passion for making the film Sight carries through to other endeavors outside of ophthalmic practice.

I have a lifelong passion for helping others to find common ground. I was born and raised in China during a particularly tumultuous period known as the Cultural Revolution (1966–1976), so I know firsthand what it is like to live under an authoritarian government and in a polarized society.

Playing the erhu and dancing during a cultural revolution. During China’s Cultural Revolution, millions of youths were deported to some of the poorest parts of the country and condemned to lives of poverty and hard labor. In 1974, at age 14, I was forced to leave school. I began working with a communist propaganda song-and-dance troop in the city in an effort to avoid deportation. During this time, I learned to play the erhu, a Chinese violin, and practiced dancing (Figures 1 and 2).

I would often play the erhu piece “Two Springs Reflect the Moon,” by Abing, a blind composer. It is sad but hauntingly beautiful—the composer imagines how beautiful it would be if he could see. I would play this piece for days on end because it resonated with me. The composer literally could not see, and I, facing deportation to a labor camp for life unless I could learn to play the erhu well enough to get into the government’s song-and-dance troop, could not envision a future for myself.

Pursuing an education. After the Cultural Revolution ended in 1976, the government began to reopen universities. I was allowed to restart my education. To enter a university, however, I first had to graduate from high school. Heeding my parents’ warning that the universities could close again, and because only 12th graders were allowed to take the college entrance examination, I had no choice but to skip three grades and return to school as a senior.

My parents secured review questions for me to study and practice tests for me to take. Our family was too poor to print copies of the tests, so my parents wrote them out by hand on scraps of paper. I spent 15 to 20 hours a day studying for 3 months. Against all odds, I managed to place in the top 0.01% of students who passed the university entrance examination, and I was admitted to the prestigious University of Science and Technology of China.

Moving to America. When I was 21 years old, a visiting professor from the United States took me under his wing and helped me to secure a teaching assistantship at the University of Maryland, enabling me to move to the United States. In 1982, I stepped off a plane in Washington, DC, with only $50, a student visa, and a Chinese-English dictionary to my name. I did not know anyone in this country, and I could hardly speak English. I started my journey to becoming an ophthalmologist.

Returning to dance. I attended Harvard Medical School and the Massachusetts Institute of Technology (MIT; Figures 3 and 4). During my time at these institutions, my old interest in dancing was rejuvenated. As I mentioned previously, I learned to dance as a teenager in China to avoid being sent to a labor camp for life. This time, I was dancing for the joy of it. I joined the ballroom dance teams at both Harvard and MIT and trained hard (Figure 5). The year I graduated from both institutions, we won the US Collegiate Ballroom Championship. 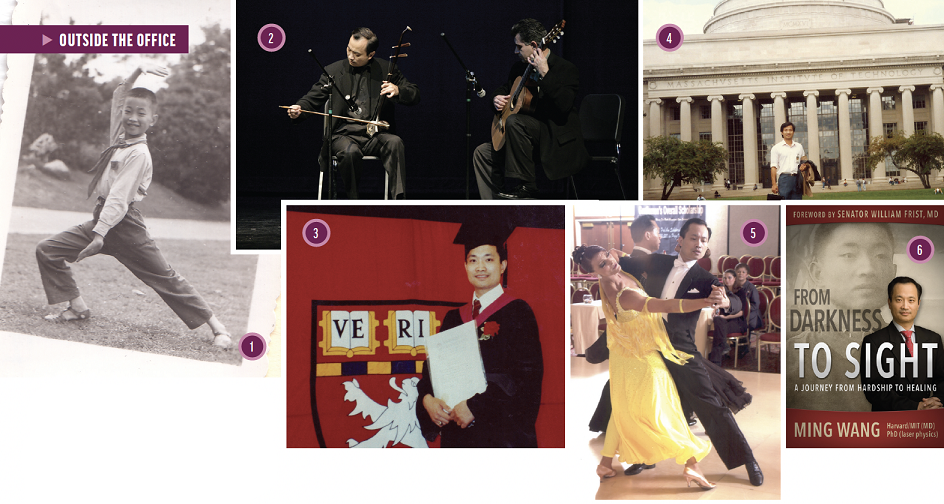 Figures. A young Dr. Wang practicing dancing in China (1). Dr. Wang playing the erhu onstage with guitarist Carlos Enrique (2). Dr. Wang on his graduation day at Harvard Medical School (3). Dr. Wang on campus at MIT (4). Dr. Wang ballroom dancing with his coach (5). The cover of Dr. Wang’s autobiography, From Darkness to Sight: A Journey From Hardship to Healing (6).

I am currently the CEO of Aier-USA, the US branch of the Aier Eye Hospital, the world’s largest eye care group with more than 800 locations and 80,000 employees across three continents. It provides eye care to 3 billion people worldwide.

I have also been active in research. For example, I developed and have obtained two US patents for the amniotic membrane contact lens, which has been used by tens of thousands of eye care providers worldwide to help millions of patients.

I founded the Wang Foundation for Sight Restoration in 2003. This nonprofit charitable organization has provided sight-restoring surgery to thousands of patients from more than 40 US states and 55 countries.

In 2016, I published my autobiography, From Darkness to Sight: A Journey From Hardship to Healing (Figure 6). I wrote the book in hopes that my story would demonstrate both the dangers of polarization and the value of finding common ground. Sight is a feature film based on my autobiography, and it costars Greg Kinnear and Terry Chen.

The film, currently in production, highlights many of the lessons I have learned and hope to share with others: